A Heart of Hickory By Lionel Freedman

I’d heard of it. But I’d never seen it. And I certainly hadn’t played it.

All of which meant that the last Friday in May, 1999 was very much a first for me. Some twenty-four golfers, walking straight out of an early 20th century wardrobe and onto the nine holes of the oldest playing surface of the world. Each with a thin, leather bag slung over their shoulder, each bag rattling as cleek, mashie and spoon vied for pre-eminence. The first at Musselburgh. A modest par-3. A mashie and two putts. On a good day. Fascinating. And completely mad.

I can’t remember who won on that glorious summer’s day. All that I know is that I’d fallen in love. Not, I hasten to add, with the members of the British Golf Collectors’ Society, whose day it was, delightful and companionable souls though they might be. But, rather, with this absurd game that they were playing. Hickory golf. And I’m happy to say that it’s a love affair that has stood the test of time, despite the odd pot bunker along the way. 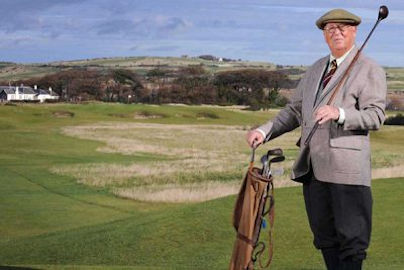 Inspired, I think, by the Society’s visit to the course, as the Club Secretary, it didn’t take me too long to decide that it was time for Musselburgh to join the fun. After all, some four hundred years earlier, Mary, Queen of Scots, had taken to these links and, given that 1567 hadn’t been a great year for the poor woman, the hope has to be that an afternoon’s golf provided some kind of shelter from the storm. There’s a famous sketch of Mary playing the course and doing so with a smile on her face and, whilst, hopefully, the players lining up in the summer of 1999 for this, the first-ever Musselburgh Challenge, weren’t shutting out the thoughts of murdered husbands, imprisonment and abdication, it should nonetheless be noted that everyone there also had a smile. And it was some field, welcoming members from such great, historic clubs as the R & A, the Honourable Company, Prestwick and Bruntsfield Links.

That first Challenge was a success. More than that. It became, overnight, an event. To be repeated, year on year, and, with each year, even more popular. Why? I’ll brood on that for a moment. But that interest and almost instinctive take-up of the hickory game seemed to me to be something of a phenomenon. And one that was to be very soon repeated on a very much larger stage.

OK. It was just a tad over-arching. It’s true that, when we first had the idea, back in2004, our hope was that we might be founding a tournament that might ring the hickory bell for all the word to hear. Hence the proud title. But, if Rome wasn’t built in a day, neither was the Open. And the evidence of that was the opening field of thirty-six on 11th July, 2005, almost all of whom were world golfers from Edinburgh, some six miles down the road.

But the seeds, however cheeky, had been sown.

That first Open was brilliant, hugely well received and widely celebrated, even if only by a local and very partisan tribe. It offered the prospect of an entirely promising future but one that was to prove beguiling rather than bespoke. The false dawn is not a concept unique to the early scrambling of the internet, clockwork radios and Fawlty Towers. Even Henry Ford’s invention struggled through from Model A to Model T before the thing finally worked. Many a success will breed its own teething troubles and so it was for the World Hickory Open.

With the embrace and encouragement of the PGA Tartan Tour, the tournament moved to the eighteen holes of Craigielaw. Professional golfers joined the ranks. One day became two. And then three. And four. Even five. The Open was growing like Topsy, generating interest from the media, public and golfing world alike. But, like Icarus, it perhaps ran too close to the sun. By 2011, peering down from the slopes of Gullane, it was clear that the Open wasn’t in too good a place, weighed down by the elephant of over-commitment, both financial and administrative. 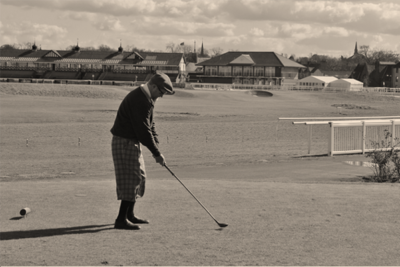 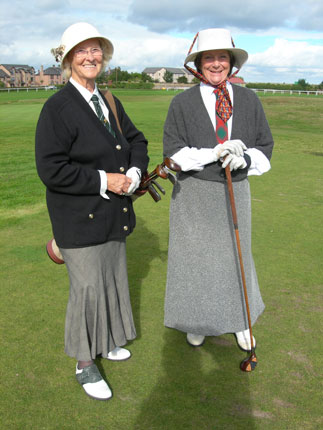 Beth Freedman
who passed away on October 8th 2020.

But, happily, the sun also rises. Not good news for Icarus. But certainly for the Open.

Returning to a simpler programme and format, taking the game back to its roots and to its earlier home at Craigielaw, in 2011, the Open recovered its magic. Once again, there was a buzz in the air and , it was with that same sense of excitement that, in 2012, we moved to Angus County. More properly, in the golfing canon, to the legendary acres of the self-styled Carnoustie County. Since when, the Open has, quite simply, gone from strength to strength.

It’s true that the exemplary promotional skills and generous support of those who run this extraordinary brand have more than played their part in this success. And it’s also true that the courses themselves – Montrose, Panmure, Abroath, Monifieth and Carnoustie Burnside – have been their own Jack O’Lanterns, guiding in visitors from the very furthest corners of the golfing landscape. But I think it’s also true that this now burgeoning growth of the World Hickory Open is no more than a reflection of a general truth that the hickory game is very much coming of age.

Yes, there were times, not so very many years ago, when the night looked very dark. Not so much a matter of not seeing the wood for the trees. But, rather, of not even being able to see the trees. That said, what was nonetheless happening, almost unnoticed, was a growth in the number of players. And, most importantly, of players from across the world. America, Europe. Scandinavia. Australia. South Africa. A growing world family and one that was returning every year.

There are now annual hickory Opens in some twenty countries. Back in 2005, you could have counted those countries on the fingers of your hand. I’d like to think that, in some small part, the World Hickory Open has acted as a catalyst to that growth and, if that’s true, then it may explain why this year, on the wonderful fairways of the Carnoustie Championship course, we will be playing host to golfers from no less than fourteen different countries. And how very welcome they will be.

A short while ago, in the context of the first Musselburgh Challenge, I said that I would brood on why the hickory game proved quite so popular. Let me take that thought further and reflect on why I think it is now beginning to take the centre stage as a sport to be defined and celebrated in its own right.

To be honest, I think that the modern game has lost its way. Technology rules. The older, classic courses are humiliated by massive and powerful clubs that demand a habitat of at least seven and a half thousand yards. The driving of Godzilla. High, vaulting approaches, complete with the obligatory back-spin. Even a yardage count, courtesy of GPS. In such a world, the Mungo Park six thousand yard challenge is a joke.

And yet it isn’t.

That challenge remains as fascinating as it was when first introduced. Play it with the clubs it spawned. The cleek, the mashie, the niblick. Play the contours of the land, follow the mindset of Willie Park, Old Tom and Jamie Anderson as they thought their way through the heathers and the whins. Bring intelligence, tactical skills and thought, hole by hole, to your game. It’s played, not in the air, but on the ground, where touch and feel are the watchwords, rather than the hammer. And, as such, it’s a game for all. Which, of course, is where it all began.

Can I put all that in a single word? I’m not sure. But I’ll try. If pushed, I’d say that that the word is fun. The hickory game is fun. Go out there and enjoy it.